Discover the most magical buildings of Antoni Gaudí 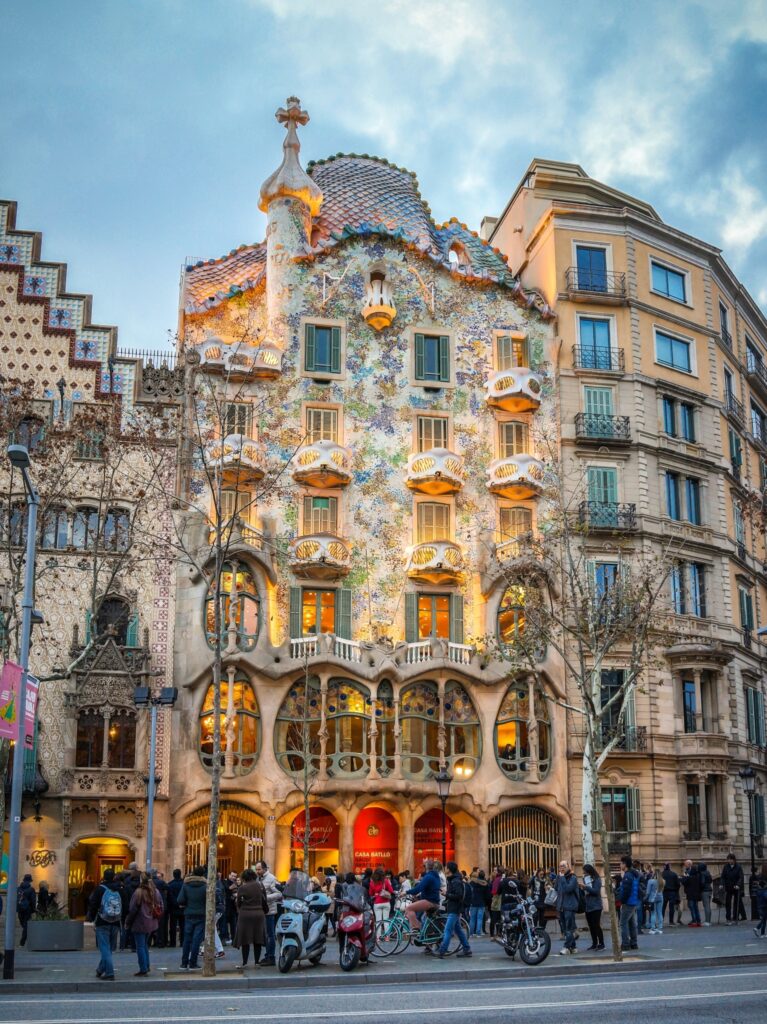 No doubt! One of the most important attractions in the city of Barcelona is its architecture, and when we speak of architecture in Catalunya we cannot leave out its most representative image, the famous architect of modernism, Antoni Gaudí.

Born in Reus, 1852, in the outskirts of Barcelona, Antoni Gaudí was an architect with a great creative and imaginative capacity.

The personal stamp of Gaudí works, is characterized by the search of new structural solutions, inspired by nature, creating an organic architectural style, a perfect fusion of all his personal passions: architecture, nature, religion, and Catalunya.

It is known that in many occasions he worked in projects without using detailed plans since he preferred to recreate them on 3D models to then improvise as the project moved on.

Throughout the years, while he was accumulating experience, Antoni Gaudí developed his own style of architecture unique around the world, creating works that were beautifully decorated in every detail, but not forgetting its main functionalities.

Thankfully for us (that live in Barcelona) and for all our visitors, the great majority of Antoni Gaudi works are in Barcelona.

¡Something to remember! is that 7 of his legacy works have been considered Patrimony of Humanity by the UNESCO.

Without more preamble, we invite you to discover together, his most recognized works, admiring the beauty of the modernist architecture of this great artist.

From the beginning of his career, during his student life, the works of Gaudí already stand out for their great precision in details and his use of geometry.

While he was doing his university studies, Gaudí worked as a drawer for many of the best architects in Barcelona, ones from he learned a lot by collaborating in important projects such as the Monumental Cascade at the Park de la Ciudadela.

With so many important works, Why we put this one at first?

He started his career designing lampposts

Located at Plaça Real, the open square at the middle walk of La Rambla, this place now has great restaurants and bars with night parties, we can see his architect-designed lampposts. That’s right those were designed by the young Gaudí as his first work assignment after graduating from the Barcelona Architectural School. 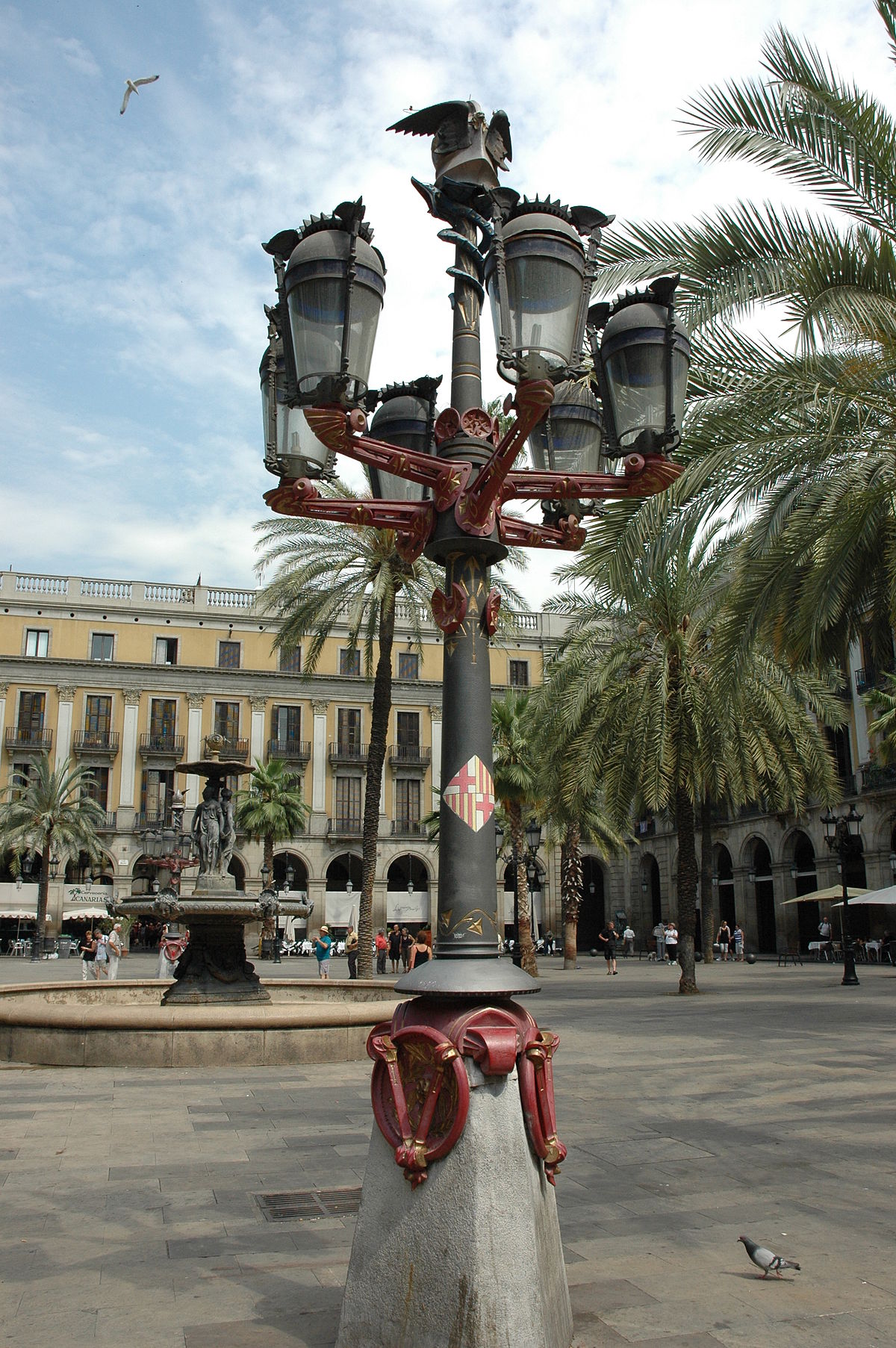 Antoni Gaudí received, in 1878, a commission from the Barcelona City Council in which he was asked to design and build some streetlights. The plaza hosts many restaurants and some of the city’s most famous nightclubs,

These streetlights were installed in the famous Plaza Real, in the gothic quarter, and were inaugurated during the main festivities of La Merce in 1879.

Casa Vicens is Gaudí’s first masterpiece, a prelude to his later work. Built between 1883 and 1885 as a summer home for the Vicens family, by order of Manuel Vicens I Montaner, it displays its unique talent. Declared world heritage site by UNESCO in 2005. 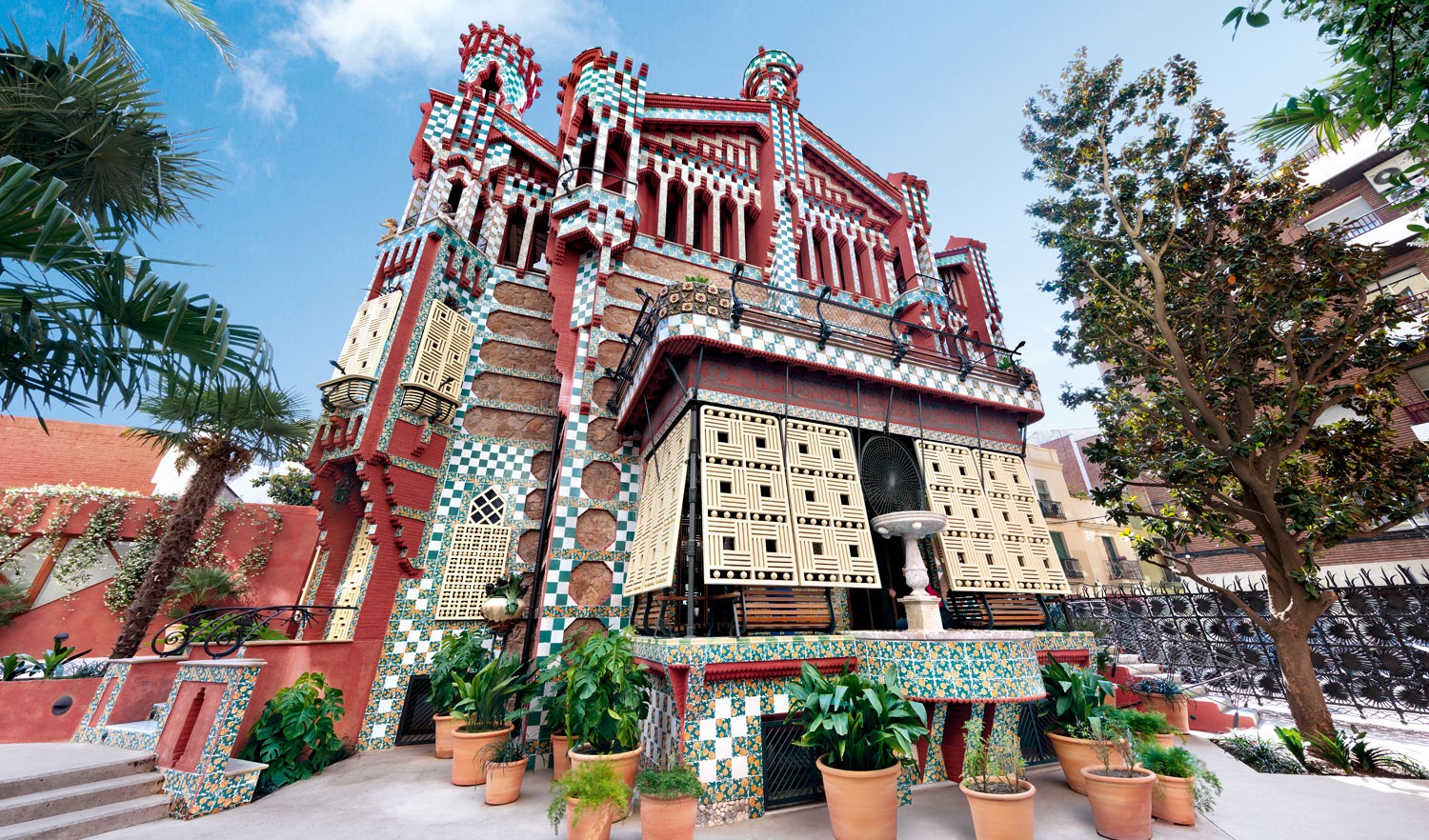 This construction has 3 facades and a large garden with a monumental brick fountain formed by a parabolic arc.

The walls of the house are of masonry alternated with tile rows, reproducing ornate yellow flowers from the area, the house also has very attractive chimneys and towers in the shape of shrines.

Inside the house, one of the most original rooms is the den, with a ceiling decorated with “Arabic muqarnas”. 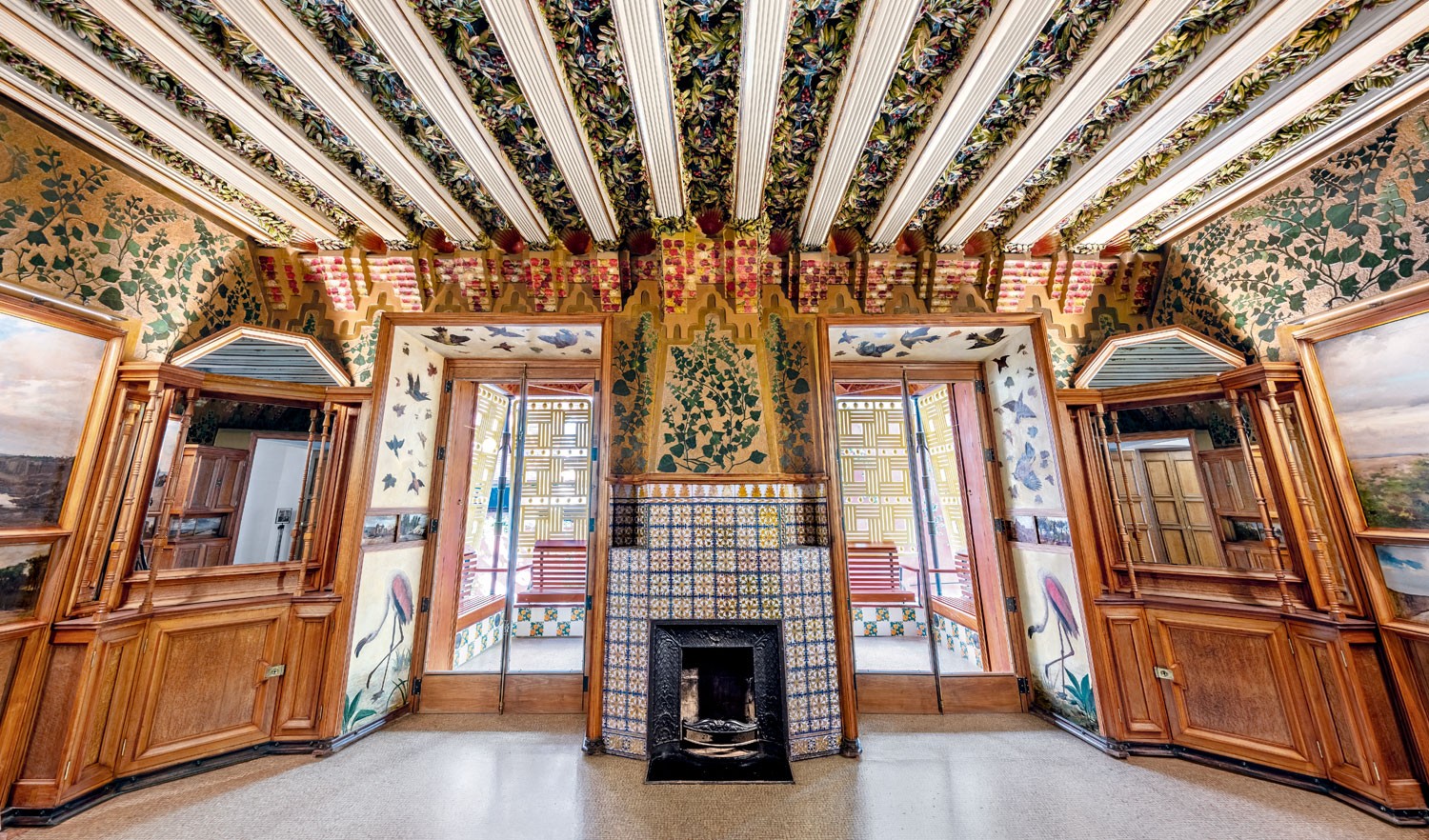 In this project, Antoni Gaudí is one of the first architects to combine Hispano – Arabic inspirations and a manifested oriental influence.

He brings in an indigenous architecture that transcended any limitation, contributing solutions with total creative liberty.

You can book a tour at Casa Vicens to experience this story!

Another work of Antoni Gaudí in Barcelona is the family house for Count Guell, built in the street Nou de la Rambla from 1886 to 1888. 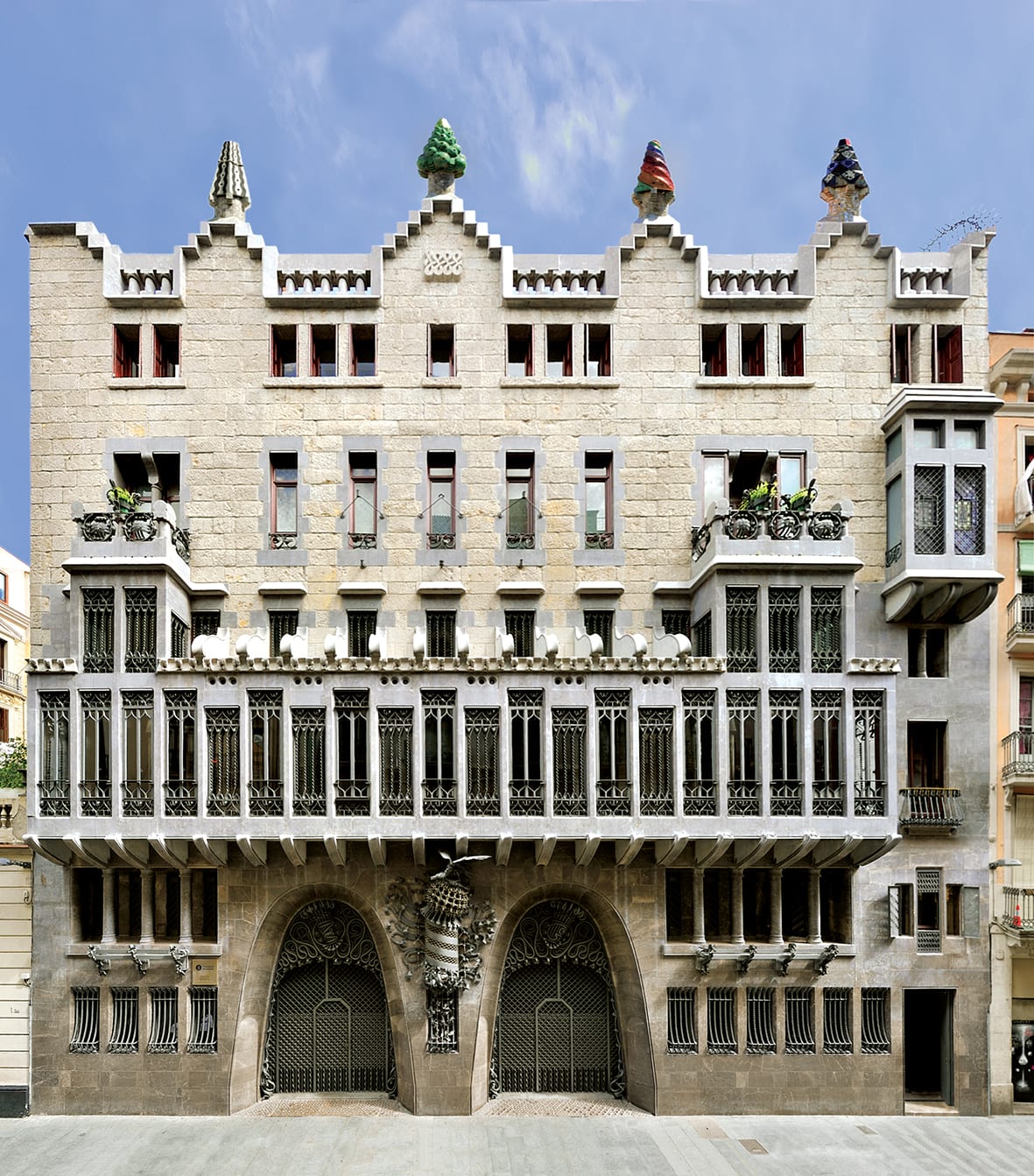 This house has the well-defined style of the great Catalan stately homes, with a monumental entrance, magnificent doors with parabolic arcs, and fences of wrought iron, decorated with the shield of Catalunya and a dragon.

This building stands out for his innovative conception of space and light and was declared World Patrimony by the UNESCO in 1984.

Tickets for the best attractions of Antoni Gaudi in Barcelona

This old summer palace of King Martin I. The Human, last king of the Catalan Dynasty of the Casal de Barcelona, was reformed by Antoni Gaudí during the years 1900 – 1909. 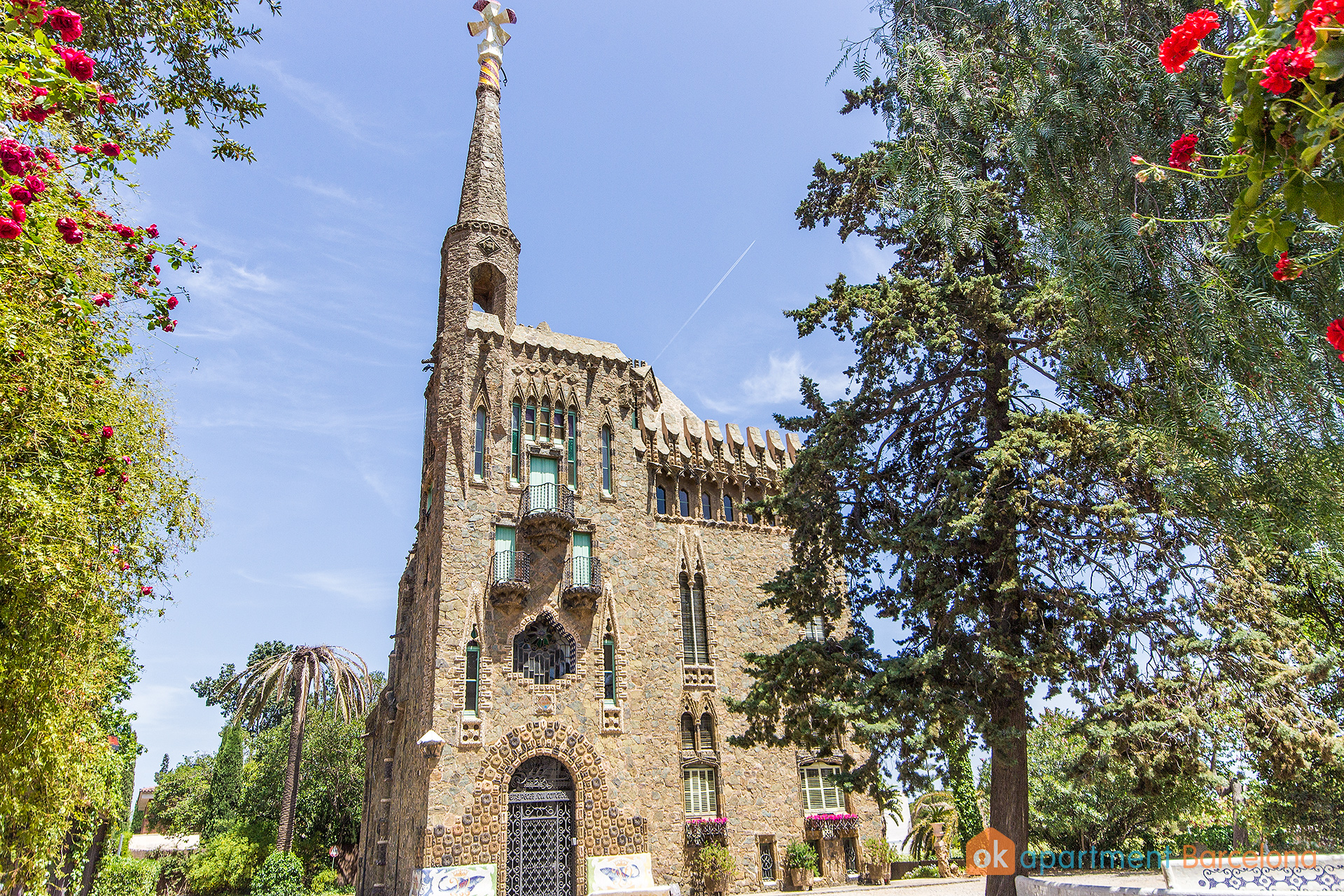 To achieve this he used the slate stone from the place for its construction.

The Torre Bellesguard might be one of the least known works of Antoni Gaudí in Barcelona. In it, Gaudí created a neogothic project, respecting the old building and as always looking to integrate the structure with its natural surroundings.

Another of the Gaudí works is located in the street Caspe in Barcelona, where our protagonist built the Casa Calvet in between 1898 and 1899.

This building, which currently hosts a restaurant, has a facade of freestone from Montjuic, balconies with wrought iron (one of Antoni Gaudí’s favorite materials) and iron crosses.

In the same way, in the facade of the main story, we can appreciate decoration with plant and mythological themes.

This is the main projects of Antoni Gaudí in Barcelona during the XX century.

Because of its location, from it, we can appreciate spectacular views of Barcelona. It is without a doubt the ideal place to visit on a sunny day.

Once again the assignment comes from Eusebio Guell, who wanted to build a residential urbanization in the style of the great English garden-cities.

In this park, Gaudí displayed all of his architectural genius showing his organic style.

At Park Guell stand out two buildings at its entrance, that have Catalan vaults and are surrounded by walls of polychromatic glazed ceramics.

In the same way, stick out the very beautiful stairways decorated with sculpted fountains with the famous dragon, which has become a symbol of the park and of the works of Gaudí.

The main entrance to Park Güell has an impressive facade and presents a stunning view of the work of art inside. The ceramic tiled stone wall and palm leaf-shaped iron gates are just a trailer of the nature-inspired architectural marvels, one would witness ahead. There are two pavilions with beautiful tile shards mosaic roofs on either side of the gate. The one on the left was used as a waiting room with a telephone booth and the other as a residence and hence the name – Porter’s Lodge.

This building in the center of Barcelona, reformed by Gaudí during 1904 – 1906, is one of the most emblematic works of the architect. 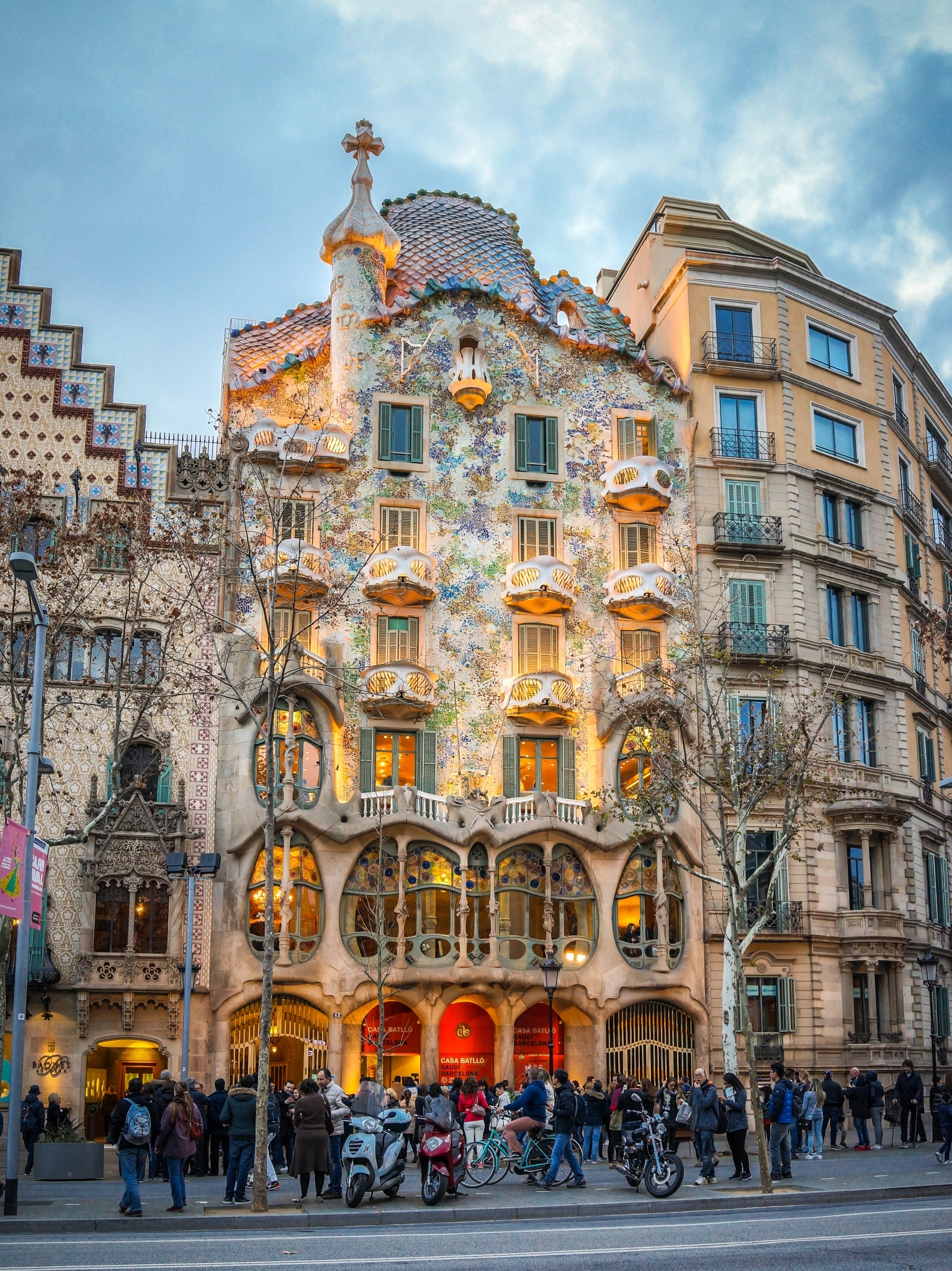 Casa Batlló is a masterwork of shape, color, and light, at which Antoni Gaudí worked with the best artisans in the city of the moment.

Every detail of the building is perfectly done, and we can appreciate works with several materials, wrought iron, wood, stained glass, ceramic tiles, ornaments made with sandstone, everything created by artisans in ways that have transcended time.

As it was his costume, Antoni Gaudí did not sacrifice functionality for aesthetics; giving the building large open and ventilated spaces, covers on top of the chimneys to allow the correct airflow, the use of translucent glass that allowed the light in without losing privacy, and many more functional details.

Every observed technicality makes us fall in love admiring the genius of Gaudí.

Would you like to enjoy the Magical Night at Casa Batlló?

Another of the most praised works of Antoni Gaudí in Barcelona is Casa Mila, popularly known as “La Pedrera”, built between 1906 – 1910 and declared World Patrimony by UNESCO in 1984. 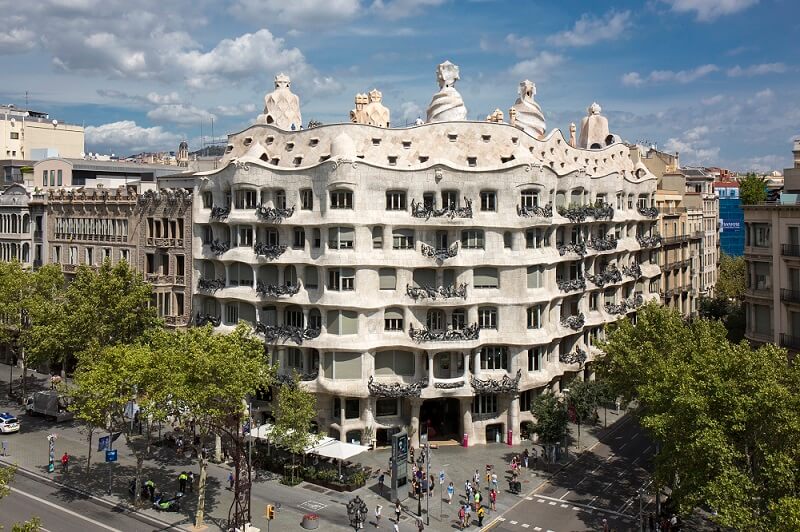 This modernist building is currently the headquarters of the Fundación Catalunya – La Pedrera and hosts an important cultural center in Barcelona.

In its structure we can appreciate once again the organic style of Gaudí, observing that the whole building lacks straight lines since nature has no straight lines.

The building was conceived around two great patios of curvilinear forms, with a structure of stone pillars, bricks and iron, and in the same way, Gaudí took care of every detail. 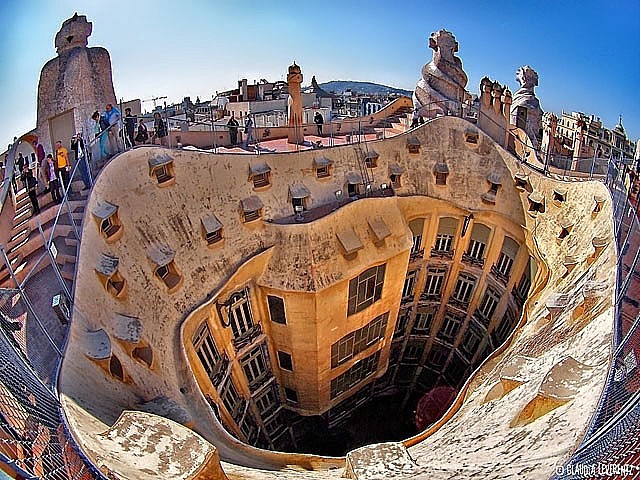 Because of its current use as a cultural space, aside from the guided visits, La Pedrera organizes several cultural activities during the day and night, making it an obligated visit in the city of Barcelona.

The Catholic Basilica of Barcelona of the Sagrada Familia is, without a doubt, the masterwork of Gaudí of most recognition, and the maximum exponent of the modernist Catalan architecture. 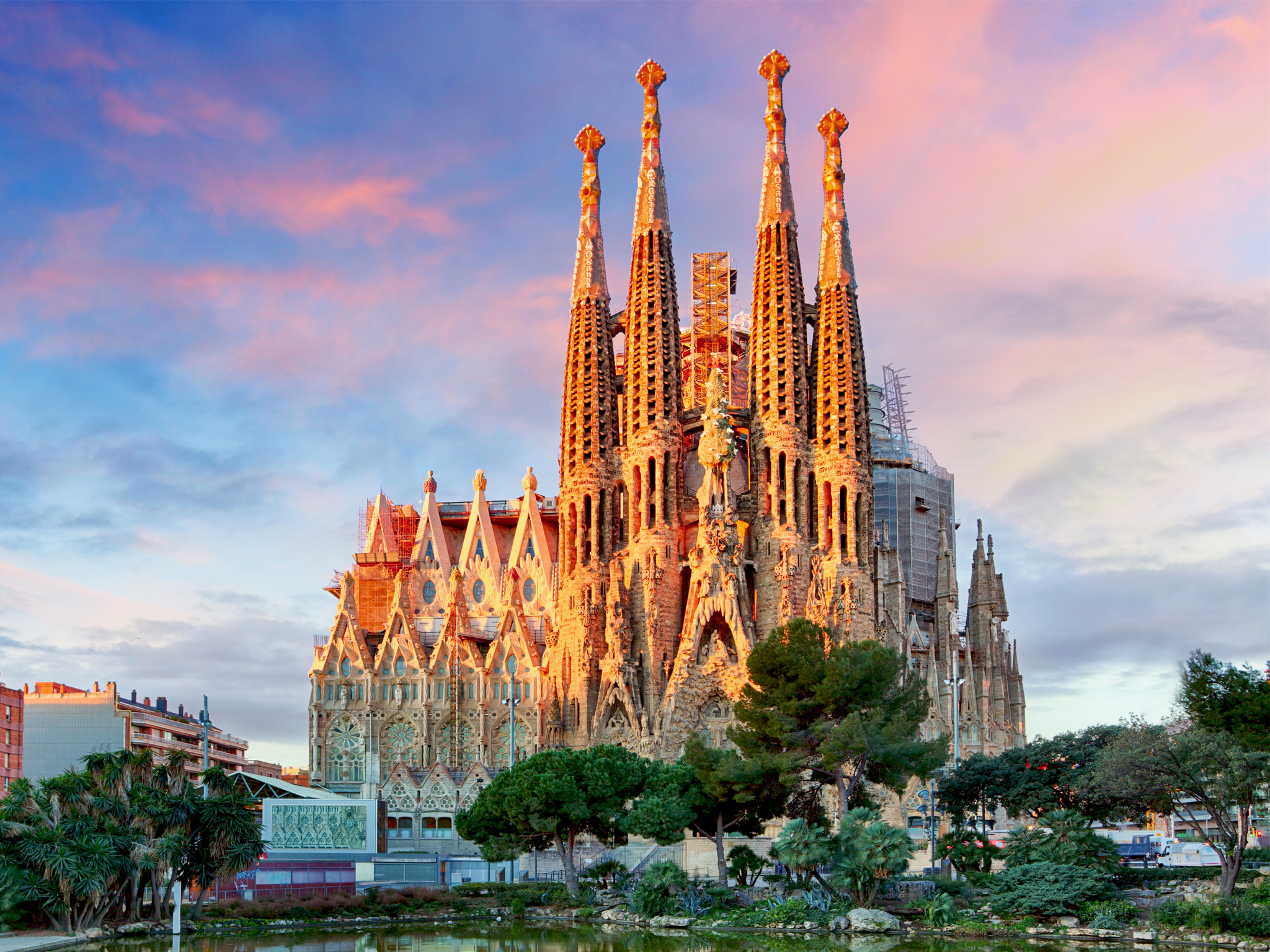 Sagrada Familia is also the most visited monument in Spain.

This project was taken by Gaudí in 1883, who restated the original construction and improvised as he went. 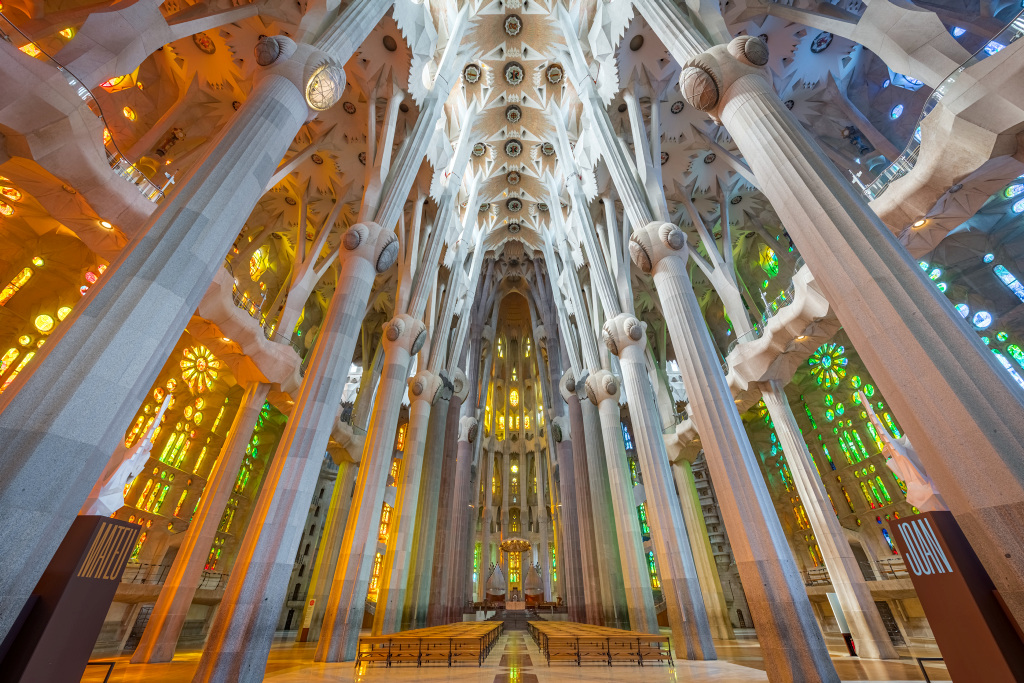 Antoni Gaudí dedicated to this project exclusively the last 15 years of his life, and we should mention that the Sagrada Familia in Barcelona is still under construction.

The works made by Gaudí include the Birth Facade and the crypt, and even though many of his plans and models were destroyed during the Spanish Civil War, the works continue without interruption and follow mostly and in the best way possible, the original ideas from the celebrated Catalan architect.

Currently, the works are under the direction of Jordi Fauli I Oller.

The works of Gaudí before mentioned are only a few of the projects of this artist in Barcelona.

We should also remember that the architect worked on several other projects not so well known such as The Guell Pavilions, The Crypt of the Colonia Guell, the Colegio de las Teresianas, the Portal Miralles, and he also designed the floor tiles that now cover the very famous boulevard of Passeig de Gracia in the center of Barcelona.

We have done our best to try to explain the works of this genius of modernist architecture named Antoni Gaudí.

Nonetheless, and due to its great passion for details, the diversity of the materials, designs, and ideas that the architect developed during his life, it is almost impossible to truly describe the beauty of his works.

It is no coincidence that the majority of his projects are still celebrated and admired around the world, being this admiration the best of the tributes to the works of Antoni Gaudí and the artist himself, don´t you think?

And now tell us, What is the project of Antoni Gaudí in Barcelona that impresses you the most? 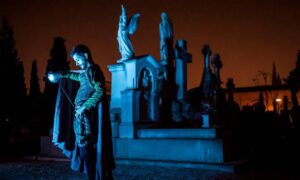 All Saints Day in Spain

All Saints Origins All Saints is a christian holiday with origins on Celtic celebrations. Around November, Celtic people used to celebrate the arrival of the 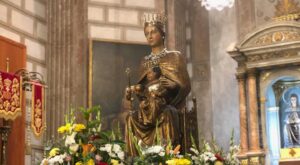 The origins of “La Mercè” date back from the year of 1218. The legend says that the Virgin appeared to King Jaume I on September 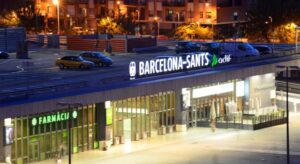 Wondering how to move around Barcelona once you arrive? This article is here to help! You’ll find out how to arrive at our accommodations from

#TravellerHouse is much more than just an apartmen 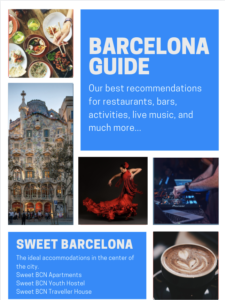 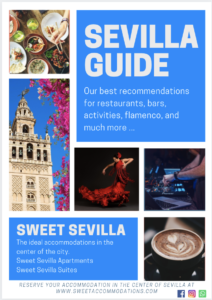 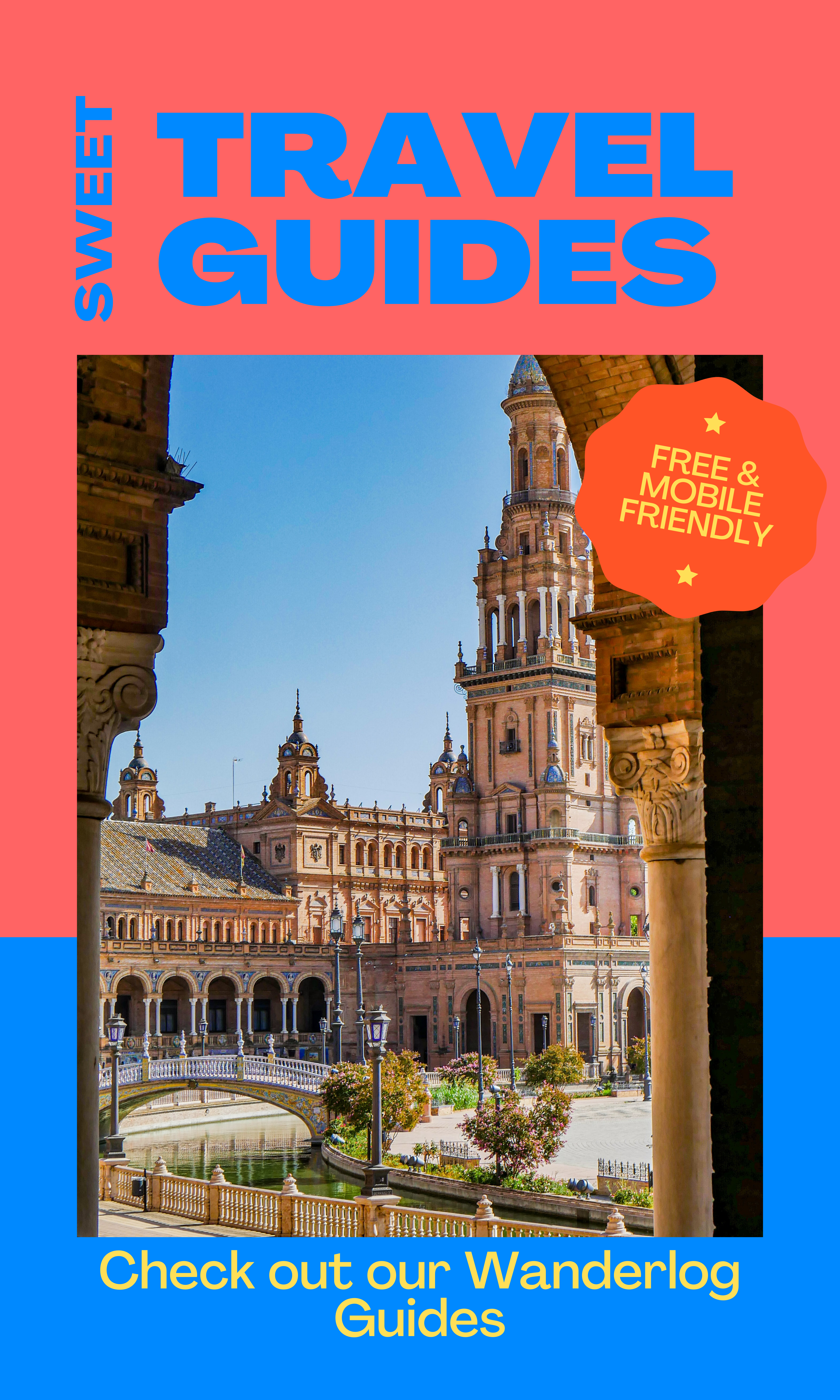